City of Brass Now Available on the Xbox One

Some of us here at XboxAddict are fans of rogue like games, others, not so much. That being said, that doesn’t mean we turn a blind eye to the genre. What does this have to do with this news article we are posting? Glad you asked. A new game called City of Brass, which is an Arabian Nights-inspired first-person adventure from the BioShock veterans at Uppercut Games, is out now.

With its signature bullwhip, City of Brass allows players to toy with enemies in a variety of ways. The versatile weapon can trip, stun, and disarm foes to make them vulnerable to blade attacks. It can also be used to swing away from dangerous situations and reach far-off objects, or even manipulate the environment to one’s advantage by triggering deadly booby traps. Navigating the settlement is enhanced by the fluidity of movement provided by using the whip to bypass obstacles and access the perfect position to fight against the next wave of enemies.

Each stage of the game is procedurally generated, providing replayability by the twisting the city’s streets to create new obstacles and secrets. Each run bestows new knowledge and tricks for perceptive thieves to wield in future runs. The journey can also be tailored to each individual player with the Blessings and Burdens system, which can alter health, damage output, and other attributed to make City of Brass as accessible or challenging as players desire.

Given that the game has such a cool setting, and that the dev-team has a rich and deep lineage, we are hoping for good things in this game, and hope to review it when we get a chance. 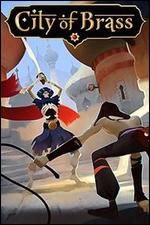 Xbox one no signal
Post by debrartin
0 Replies, 43661 Views