Seems that an old-successful-pixel-art-indie-game is releasing on Xbox One!. Develooper Behold Studios is partnering with Seaven Studio to bring Knights of Pen and Paper +1 Deluxier Edition to Microsoft’s console at the end of the month, May 30th to be exact.

We here at XBA will admit it, we have no clue what this game is about, so here is what the studio says:

Knights of Pen & Paper is a lighthearted RPG that can be played by any gamer where you control a group of players playing their characters in a tabletop RPG experience. All with classic turn-based battles, lovely pixel-art and lots of adventures. Besides the players, you are also in control of the dungeon master to create quests and tailor the difficulty of your battles to customize your RPG experience even further.

Knights of Pen and Paper +1 Deluxier Edition brings all of the ever released content in one single, cheaper, game. How cheap you ask? Well, how about $14.99 cheap? We don’t know what the Canadian price will be, but it should be too much more. So, on that note, we are outta here. 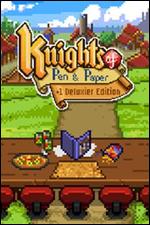