Milestone continues to develop motorcycle racing games, and a new one was announced.  They unvieled that its successful IP dedicated to all two-wheels lovers, the RIDE series, is returning for the third chapter this year, releasing on November 8.

The RIDE franchise is one of the most consolidated in Milestone’s portfolio, a series of titles dedicated to all motorbikes’ fans. The series has established itself as a tribute to the motorbike culture, recognized as unique in its genre thanks to the extremely wide offer, with RIDE 2 winner of the Guinness World Record for Most licensed bikes in a videogame, and to the game experience it offers.

While continuing the franchise’s tradition, RIDE 3 is said to have been revised, especially in terms of realism, customization and for the variety of content included: a mix of elements that make this third edition of RIDE the ultimate motorbike encyclopedia, a realistic and adrenalin-packed title dedicated to those addicted to racing.

RIDE 3 has a whole new heart, Unreal Engine 4, and a completely revised experience: whilst maintaining the identity of the series, this title brings a bunch of new features and elements that will make the player feel the adrenaline like a real rider. The list of tracks has been increased to satisfy everyone’s tastes and needs: there will be GPs and Supermoto tracks for those who wants to feel like professional riders, Country and City circuits to ride in the most iconic places around the world, Road Races to race on road circuits and Drag Races for those who love acceleration races that take place on straight tracks.

You can check out the official announcement trailer below to see what all the hub-bub is about: 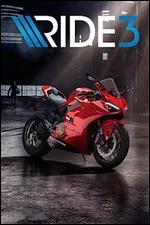