Omega Strike Coming to Xbox One this Month (June)

Indie publisher Digerati and developer Woblyware have recently announced that their2D platformer Omega Strike is inbound for Xbox One. The game is set to launch June 15th on Microsoft’s console. It should be noted that they also announced that Xbox One players will be able to pre-order the game and get a 40% discount on the launch price from June 5th (Tuesday).

Omega Strike is a Metroidvania game with a huge, open-ended world and multiple playable characters. As Doctor Omega and his mutant armies march toward world domination, only a few brave freedom fighters stand in his way. You will have to overcome deadly enemies and learn new abilities for your heroes. Explore the world, find its hidden treasures and upgrade your weapons to defeat Doctor Omega and his evil henchmen.

Here are a few noteable features of the game:

For those that are intrigued, you can check out the multiplatform trailer showing off the game in action below: 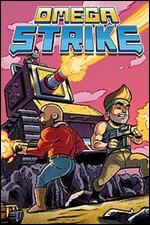