Yet Another Zombie Defense HD Now on Xbox One

Looking for a new game that you didn’t know existed? Well, we indeed may have some news about such a game, and that game is called "Yet Another Zombie Defense HD".

The game is all about defending yourself against the dark hordes that attack you every single night. You know it’s a lost cause – the undead horde is overwhelming and sooner or later your time will come. So, if you’re gonna go, go in style, and pave your way with piles of fallen monsters before they squash you.

You’ll find that it is a top-down arcade zombie shooter with tactical/strategic elements. Prepare yourself before nightfall – build defensive barricades, buy guns and ammo, set up turrets, and stay alive as long as you can. Each night puts your skills to the test, as the zombie forces become stronger with each wave.

Here are a few features of the game that might just catch your attention:

So, does this catch your attention? We will be reviewing this as soon as we get to it, so keep your eyes on our website for more. 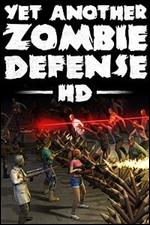