Bomber Crew has Flown onto the Xbox One

Brighton-based two man development team Runner Duck Games, alongside Curve Digital, have announced that Bomber Crew has maintained its course and exploded onto the Xbox One. Bomber Crew is available to play on Xbox Game Pass, letting subscribers rack up their flight time.

So, what is this game you ask? Great question. In Bomber Crew players must recruit, train, and upgrade their very own WWII flight team before piloting a Bomber over enemy territory. Your crewmembers only have one life, so every mission is fraught with danger as you guide the crew to victory while dodging flak fire, soaring through unstable weather conditions, avoiding enemy radar detection, battling dreaded enemy Aces, and more. Still you know what they say - who dares, wins.

Every Bomber is fully customisable, with the ability to change the base colour - from gaudy pink to camo green - all the way up to upgrading its bombing capability and your chances of survival. Using the in-game tool, you can even slap your slogan on the side of the vehicle or draw your own wing art, to strike fear or laughter into the hearts of your enemies.

We are going to review this game as soon as we can, and will let you know what the verdict it. 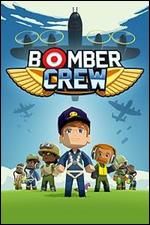