EA Sports have thrown out an open invite to fans of their NHL sereis to participate in an open beta where they can experience The World of CHEL, an evolution of the EA Sports Hockey League mode that introduces a unified progression and customization system for created players. The beta will allow players to take the ice in the brand-new NHL ONES game mode, as well as THREES Drop-In, EASHL Drop-In, Clubs modes and Online Versus with the 31 current NHL teams.

With the progression and customization of The World of CHEL, NHL 19 provides gamers the freedom to create and compete as the player they’ve always wanted to be. In the beta, players can customize their skaters with 15 different traits and 21 different specializations, in addition to customizing their goalie with six traits and nine specializations. The beta will also feature hundreds of unlockable items like hoodies, jackets, parkas, and knits to create a unique look with league-inspired lifestyle gear and clothing.

The open beta will run today through August 2nd. Players can download the open beta in the Xbox Marketplace. 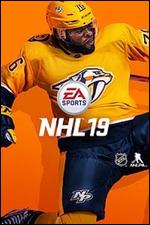