Cartoon Network and Outright Games have revealed they will release a new boxed product exclusively at retail this fall featuring two of Cartoon Network’s top games in one package: Steven Universe: Save the Light and OK K.O.! Let’s Play Heroes. 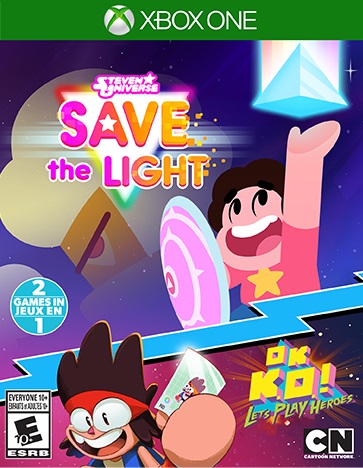 Steven Universe: Save the Light is the sequel to the hit mobile RPG Attack the Light. Discover new and familiar characters on a journey through Beach City and beyond to stop a mysterious Gem new to the world of Steven Universe. Build your party of heroes from the show, level them up with new gear and abilities, and unleash mighty team attacks and Fusions in thrilling battles that blend real-time and turn-based elements.

OK K.O.! Let’s Play Heroes is an off-the-wall action RPG developed by Capybara Games with an original storyline made in collaboration with OK K.O.! Let’s Be Heroes series creator Ian Jones-Quartey. When the diabolical Lord Boxman resets the card levels of every hero in Lakewood Plaza Turbo, a mall for heroes, it’s up to young K.O. to help his friends, defeat Boxman’s robot army and save the day. Smash and bash through ridiculous quests and hard-hitting battles featuring brawler-style combat, leveling up with new combo moves to prove yourself to the comical characters that call Lakewood Plaza home.