Defenders of Ekron Definitive Edition Out Now on Xbox One

The Chilean team In Vitro Games has launched the Definitive Edition of their shoote’m up Defenders of Ekron, and it has hit the Xbox One.

In Defenders of Ekron you are a pilot of an Anakim, the most powerful and advanced mechs of Ekron. Those advanced pieces of high-tech possess a unique ability called Isvara that allows them to absorb the energy of their environment to channel it in devastating attacks. Unfortunately, our Anakim is not able to develop its Isvara, so we will be completely helpless before the appearance of a group of Renegade Anakim pilots who threaten to destroy the established order.

Defenders of Ekron Definitive Edition players will enjoy a dark plot, full of secrets along 10 missions among the following features:

We hope to have some impressions of the game as soon as we get a chance to check it out. 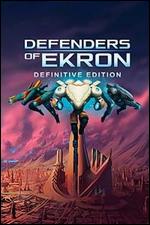