Western Fans have been rewarded as THQ Nordic has made quite the announcement today.  They want to take you to a place where the law is made by those with a gun in their hands and enforced by the henchmen at their command. A place where death is no stranger and undertakers work overtime… and that game can be found by people who start playing Desperados III.

This real-time tactics game, developed by German game studio Mimimi (who earned their spurs with the critically acclaimed title Shadow Tactics: Blades of the Shogun), lets players command a band of Desperados led by fan-favorite gunslinger John Cooper, who’s hunting down his nemesis.

Heavily inspired by the first game of the franchise, Desperados: Wanted Dead or Alive, Desperados III will allow players to approach each mission with a wide variety of routes and solutions. As your gang will always be outnumbered, only smart use of both the environment and each Desperado’s unique character skills will guarantee a victorious outcome.

And yes, this game is indeed coming to the Xbox One to, but you’ll have to wait until sometime in 2019 to play it.

You can check out the announcment trailer below for more of a visual idea of what to expect: 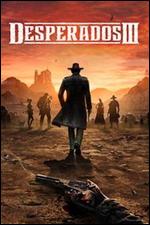