Shikhondo - Soul Eater Out Today on Xbox One

The intense bullet-hell shmup Shikhondo - Soul Eater is now available to download on Xbox One. To celebrate the launch, the game’s developer, DeerFarm, has put together some helpful tips for racking up the kinds of huge scores you’ll need if you want to be a serious leaderboard contender

So, you may be asking what this game is all about. Shikhondo - Soul Eater is a Korean bullet-hell shoot ‘em up set within a beautiful and bizarre world of Asian mythology.

Armies of demons known as yokai have escaped from Limbo. They are spreading like a plague across the land, sowing fear and stealing souls. You must destroy the pestilent invaders and free the captured souls from eternal torment.

The game includes Arcade, Hardcore and Local Co-op modes. Some of the game’s key features are as follows:

If you are a gamer who enjoys a shump now and then, you may want to take a look at this game. 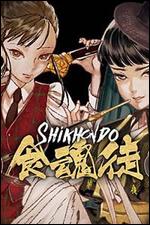