Strange Brigade Has Finally Launched and has Hit the Xbox One

Rebellion’s third-person romp for 1-4 players has hit the Xbox One. Strange Brigade sees players travel to North Africa, where terror abounds. Seteki the evil witch queen has risen once more, bringing with her a reanimated army of ungodly undead. Malicious mummies, manifest myths and myriad monstrosities - what manner of heroes can fell such ghoulish foes and lay rest to the witch queen for good?

What does this all mean? Well, it means that it’s time for the Strange Brigade With the finest firearms available and a spot of supernatural power, this secret organization of manifold heroes can save the day!

The game offers a story campaign brimming with rambunctious shooter action, lush environments to explore, prickly puzzles to solve and terrific treasures to discover. On top of that, adventurers can pit their wits against Horde Mode and Score Attack at launch - and like the campaign, they’re playable solo or online for 2-4 players.

You can check out the game in action in the launch trailer below: 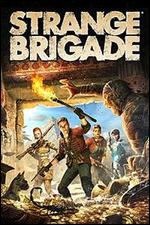