Construction Simulator 2 Now Out on Xbox One

Add another simulation type game to the Xbox One library of games as astragon Entertainment and the developers of weltenbauer. SE have announced that Construction Simulato ®2 US –Console Edition is out in the wild for fans to check out. .

With the porting of Construction Simulator 2, which until now has only been available for mobile devices, the weltenbauer. SE developer team is fulfilling the fervent wish of many fans to see new content such as road construction or an extended vehicle fleet by famous US makers on PC and, for the first time in the history of the game series, on consoles.

You will encounter more than 40 originally licensed construction machines and vehicles by world-renowned companies such as Caterpillar, Liebherr, Palfinger, Bell, STILL, ATLAS, Mack Trucks, MEILLER Kipper and Kenworth within the fictitious US state of Westside Plains. These vehicles will be used to tackle over 60 diverse and challenging construction contracts, which can be found in different places all across the open, freely drivable game world.

No matter if it is the excavation of building pits, the control of gigantic cranes, the loading of building materials, the pouring of concrete or the asphalting and treatment of roads – Construction Simulator 2 offers the right task to every construction fan. Special missions such as the construction of a large shopping mall, museum or philharmonic hall offer additional variety.

Check out the launch trailer below for a hint of what to expect: 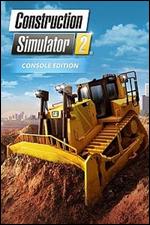