Hover Available for the Xbox One on September 19th

A new game is out on the Xbox One and it is cross compatible with Nintendo Switch and PC players. What is this game you ask, well, it is the the futuristic parkour game Hover!. It is launching soon for Xbox One on Sept. 19.

Ok, what is this game about? Well, Hover is a fast-paced single and multiplayer parkour game set in a futuristic 3D open world. The game takes place in ECP17, a high-tech city also called Hover City by its inhabitants and located on a distant planet. The Great Admin cut the communication with the Galactic Union and established a strong dictatorship. Having fun has become illegal and entertainment is banished.

You’re in charge of a team of young rebels, who fight against the new anti-leisure laws oppressing the city. Equipped with high-tech gears allowing amazing jumps and speed, the rebels can roam the city to sabotage the propaganda, help citizens, and put an end to the oppression by reaching the Galactic Union!

So, will you take up the cause? If you will, or even if you might not, check out the trailer below to see the game in action. And yes, we know it is a Nintendo Switch trailer, but that is what our PR provided us, don’t be mad bro. Remember, Xbox One players can play with Switch players, so it’s the same game. 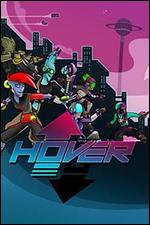