8-Bit Armies is Out Now for Xbox One

The 8-Bit battalion has arrived on the Xbox One as the colorful RTS game 8-Bit Armies is now available worldwide, both digitally and physically. 8-Bit Armies is a fresh RTS game with modern military theme, which is easy to learn and play on consoles. SOEDESCO recently also announced a special Limited Edition of 8-Bit Armies, which will be available in stores on December 13th.

In 8-Bit Armies, players can obliterate their enemies in an epic clash of firepower, commanding massive armies of tanks, artillery, aircraft, snipers, engineers and superweapons. With 40 singleplayer missions, 12 co-op missions, an online multiplayer mode and an AI skirmish mode, there’s tons of epic battles to be fought.

In addition to 8-Bit Armies, there’s two more games in Petroglyph’s 8-Bit RTS Series: The fantasy themed 8-Bit Hordes and the sci-fi themed 8-Bit Invaders. Each game has its own  maps, singleplayer campaign, skirmish and co-op missions, but they all share a unique feature: cross-title multiplayer. This means that the three games can be mixed up online, so that players can use their tanks and troops to battle against fierce dragons or savage aliens.

For those looking for a visual idea of what this game offers, check out the trailer below: 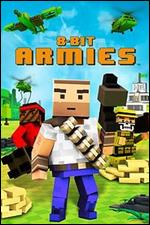