The Steel Rats are ready to ride! The game, that carries the the same name, is coming out November 7th. The all-out, action-arcade-inspired motorbike combat racer hitting various platforms, incuding the Xbox One. At launch, the standard edition of Steel Rats will be priced at $19.99.

Said to be a visceral and groundbreaking evolution of the 2.5D action-arcade genre, Steel Rats fuses destructive, octane-fueled motorbike combat and death-defying stunt gameplay, all set in a stylized, retro-future world. You will switch between four unique and upgradeable characters as you wreak havoc and defend your city from an invading armada of junk robots.

Check out the trailer below to see the game in action: 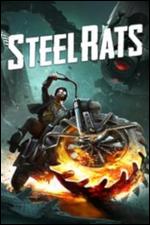