KEMCO has been busy lately. It has announded that Chronus Arc , an RPG for the Xbox One (and Windows 10 PCs) has hit the Microsoft Store at a standard price USD 14.99.

So, what is this old school looking RPG about? Well, Loka is a young boy who is training to become a Sorcerer Knight. He is heading off to get the Chronus Fragments, which are needed for the ceremony of ’Time Rewinding’, in which the current world is overwritten by the past. However, the sudden appearance of a mysterious man intent on stealing the Fragments changes all this, and Loka finds himself on a quest with his childhood friend, Princess Sarna. Their quest is a fight for the Chronus Energy, which has the power to unify time...

The puzzles in dungeons are one of the major features of the game. The puzzles include switches, boxes, pots and other features, and it’s necessary to solve the puzzles before you can progress! Sometimes you might even need to make use of the enemies prowling around! Even if you fail to solve a puzzle, you can reset it with just a button press, so it’s easy to try as many times as you want to.

Characters become stronger with each class change, so it’s a good idea to change regularly! Even after a class change, any learned magic and skills will not be forgotten. Change classes as you want, to develop characters that are uniquely your own!

You can check out a trailer highlighting some of the gameplay below: 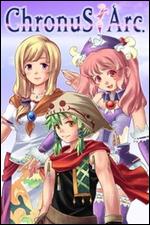