Ok, this is for those Real Time Strategy fans in the audience. The bright and bold RTS game 8-Bit Hordes will release on the first of February 2019, and that includes the Xbox One platform.

8-Bit Hordes’ predecessor in the 8-Bit RTS Series, the modern warfare RTS 8-Bit Armies, was released for console on the 21st of September this year. A Limited Edition of 8-Bit Armies with loads of fun collector’s items is also on the way and will arrive on the 14th of December 2018.

So, what is 8-Bit hordes all about? Well, players command enormous armies of mythical medieval creatures from one of two factions: the Deathsworn or the Lightbringers. The Deathsworn is a dark lot, with fiery Dragons, terrifying Cyclops and evil Wraiths; whereas the Lightbringers fight with brave sorceresses, sturdy Treants and fierce Phoenixes.

And, just so you know, each game in the 8-Bit RTS Series is a full standalone game with unique content. What all three games have in common is their colorful blocky voxel style, and the fact that they can be mixed together in unique online cross-title multiplayer versus and co-op. Players that own 8-Bit Hordes for example can cross swords with the floating brains of 8-Bit Invaders or the relentless snipers and nukes of 8-Bit Armies. The series’ uncomplicated console controls make it easy for players of all levels to build massive bases, summon and command colossal armies, and leave the enemy’s realm in pieces.

So what do you think, is this something that interests you RTS fans out there? 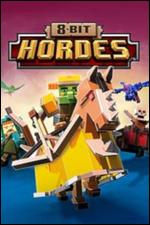