World of Final Fantasy Maxima Hits the Xbox One Today

Ok Final Fantasy fans, a new game in the franchise has hit the Xbox One today, as it welcomes new adventurers to discover the magical world of Grymoire in World of Final Fantasy Maxima. It’s available on a few different systems, including the Xbox One , Xbox One S, and Xbox One X.

So, what can fans expect. Well, this enhanced, upgraded version of World of Final Fantasy adds even more fun and excitement to Reynn and Lann’s journey through the mysterious world of Grymoire as they rediscover their past and save the future. World of Final Fantasy Maxima has been described as the definitive way to experience this colorful adventure, with an all-new Avatar Change system that allows players to add fan-favorite Final Fantasy champions – including Cloud (FINAL FANTASY VII), Yuna (FINAL FANTASY X), Noctis (FINAL FANTASY XV), and more – into their stacks to create more powerful and strategic battle options than ever before. The game also features new legendary characters and Mirages (monsters), side-quests, boss battles, mini-games, and a challenging new Nightmare difficulty mode.

We were watching a few streams, and we have to say this game looks CUTE, caps being added for emphasis. 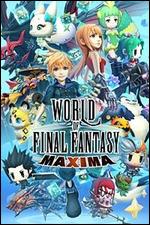