Ok, this news is not just for fans of any Spyro game, but it is for those that love great looking 3D adventure/platform like games too. Spyro, the iconic purple dragon that spawned three games in the late ‘90s is making an epic return today with the release of Spyro™ Reignited Trilogy.

So, if you have been living under a rock, you might not know what to expect. Well, Spyro Reignited Trilogy introduces players to a fully remastered game collection with a re-imagined cast of characters, animations, environments, brand-new lighting and recreated cinematics—all in stunning HD.

In Spyro Reignited Trilogy, lead developer Toys For Bob is giving fans an all scaled-up version of the original three Spyro games that started it all, Spyro the Dragon, Spyro 2: Ripto’s Rage! and Spyro: Year of the Dragon, but with a modern-day feel that makes it fresh and fun for today’s player.

Adding to the fun, voice actor Tom Kenny is returning to the franchise as the voice of Spyro in all three remastered games. Longtime fans will be treated to Toys For Bob’s reimagined version of the classic soundtracks, in addition to an all-new title-screen theme from original soundtrack composer Stewart Copeland. Additionally, the new game brings an in-game audio feature that allows players toswitch between the original and the newly remastered soundtracks, for those who want a more classic gameplay experience. Players can simply fly in to the “options menu” at any time during gameplay, unleash their preferred nostalgic or scaled-up groove, and glide right back into the Spyro action without losing saved data.

Our review is in progress, and we hope to have it up ASAP. 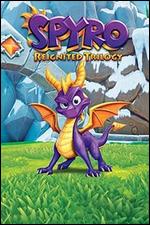