If you remember playing D&D games back in the day, then we think that this news, about this game, might just be for you. After bringing Knights of Pen and Paper +1 Deluxier Edition to modern consoles back in May, Seaven Studio have partnered up with Kyy Games and Behold Studios again to bring Knights of Pen & Paper 2 - Deluxiest Edition a few platforms including the Xbox One.

Unfortunately, Xbox One fans will have to wait a few days to pass, as PS4 and Switch owners get it first. After that few day window, then the Xbox One will be bringing up the rear and get their own edition on December 14th. Why the delay you ask? Well, we have no clue, but I am sure there MUST be a GOOD reason (note sarcasm).

Also starting today, you can pre order a Knights of Pen and Paper Bundle, which brings the two games together, for $22.49 that will release at the same time! That’s a cool 20% saving compared to buying both games separately. 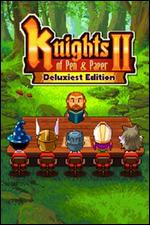