So, if you’re still playing Tekken 7, then this news should be something that you pay attention to.

Fan-favorite fighters Armor King and Craig Marduk will be joining TEKKEN 7. The characters were officially revealed on-stage at the Tekken World Tour Finals event in Amsterdam.

The fates of jaguar-masked luchador Armor King and Vale Tudo-champion Marduk became forever intertwined when Marduk killed Armor King’s brother and wrestling partner—the original Armor King—in a bar fight during the events of Tekken 4 Since then, a violent rivalry has festered between them, with battles being waged both inside the ring and out; their most recent brawl left them hospitalized and unable to compete in the 7th King of Iron Fist Tournament.

Fast forward to the present and both heavyweight bruisers are back and ready to continue their conflict as the latest characters to join TEKKEN 7. Armor King and Marduk will be available for download at the below times:

Feel free to get a look at the the returning characters in the videos below. Oh, and one more thing, the Armor King trailer also gives a sneak preview of another veteran of the franchise, the fleet-footed Julia Chang, who will be making her TEKKEN 7 debut at a later date: 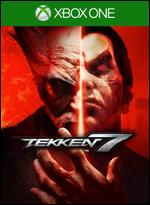