Legendary Eleven Out Now for Xbox One

So, there seems to be other soccer games out there that aren’t named FIFA or PES. What are they you ask? Well, Legendary Eleven is an arcade soccer game inspired by the golden age of soccer spanning the 70’s to the 90’s (Trailer below is an early teaser trailer provided by PR).

It is said to bring a fresh approach to the game, with fluid gameplay and unique mechanics. You can develop plays and keep the possession of the ball to perform unstoppable Super Shots. You can also gamble with sliding tackles to steal the ball without the referee whistling for a foul, trust in your fans to support you if you’re losing, or use special trading stickers to boost the stats in your team. As a game overall, the developers say that it is an over the top, fun and very accessible football game set during the retro World Cups that made history and inspired generations of players and fans.

Here are a list of the features that are notable in the game:

So, are you going to take a chance and check out Legendary Eleven? 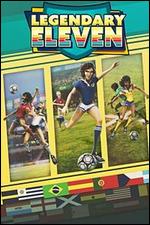