JackQuest: Tale of the Sword Hitting Xbox One Late January

A new game is coming soon, and it’s not a blockbuster triple-A title, but don’t let that dissuade you. JackQuest: Tale of the Sword, a fast-paced fantasy action platformer from publisher Blowfish Studios and developer NX Games, will be hitting various platforms, including the Xbox One, January 24th.

What is this game you ask? Well, you’ll undertake a rescue mission to save Jack’s beloved Nara from the revolting orc Korg, who captured the fair maiden and dragged her away to his subterranean lair. Journey into the caves and discover Kuro, a spirit imprisoned inside an enchanted blade. The unlikely duo of Jack and Kuro adventure into an underground labyrinth to liberate Nara, defeat her crazed captor, and perhaps even break the curse over Kuro.

JackQuest: Tale of the Sword is set in a massive interconnected world, JackQuest is teeming with environmental puzzles, invaluable power-ups, special abilities, and magnificent weapons to aide Jack in surviving Korg’s hideout and the denizens therein. Alongside an army of minions standing in Jack’s way are colossal bosses that will need to be felled before our heroes realize their goals. 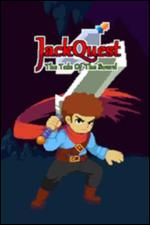