RIOT: Civial Unrest Now Out on Xbox One

RIOT: Civil Unrest, a real-time riot simulation experience has officially been released on various platforms, including the Xbox One..

What is this game about a riot all about you ask? RIOT: Civil Unrest was born out of the real-life experiences of its artist and creator, Leonard Menchiari. During the summer of 2011 Leonard attended the NO-TAV protests in northern Italy. There he witnessed first-hand the actions of both the protestors and law enforcement officers.

The game places you at the heart of some of the world’s most recent confrontations. A complex strategy game, RIOT: Civil Unrest sets players objectives for each scenario. It’s then up to you to choose how to tackle each situation, employing different strategies and tactics in order to achieve the perfect outcome.

Discover if you can dispel an angry crowd or overcome a well-equipped militia with RIOT: Civil Unrest. Player performance is rated, aggression can lead to a quick, successful outcome but a softer approach may have the same resolution without damaging public opinion.

We thought we should attach the latest trailer for you so you can get an even better understanding. Oh, and did we mention you can play as the police or as the rioters? Yep, you can indeed pick a side. 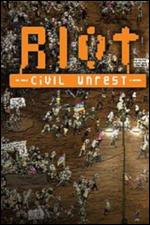