Colt Canyon Announced for Xbox One

If you consider yourself a fan of punishment, or in the videogame world, rogue-like games, that we have some news for you. Headup has announced that Colt Canyon, a title that is developed by Retrific Game Studio, will be released in Q3 2019 for a few platforms, including the Xbox One.

Colt Canyon is best described as a stylish 2D pixel art twin-stick shooter with roguelike elements in which you control a cowboy (or a cowgirl - equal rights people), whose mission it is to save their kidnapped partner from ruthless bandits. Take your revolver, knife and TNT and shoot your way through a hostile canyon full of hidden treasures, weapons, obstacles and all kinds of bloodthirsty scum. Perhaps you can save more people than just your beloved one. You can also enjoy Colt Canyon with a friend by playing its 2P local co-op mode.

With permadeath, roguelike gameplay, and many unlockable characters, Colt Canyon is said to offer up high replayability value as players will find that every run is different.

Though the canyon’s basic layout is handcrafted, everything else is randomised. You can explore the levels to find new weapons, ammo and kidnapped people or prisoners who you can rescue to earn upgrades - some are even willing to help you on your mission. Through specific actions you can unlock new characters, starting loadouts and more to make your next run easier or tougher.

So, if that remotely interests you, or if you just want to see the game in action, check out the video below: 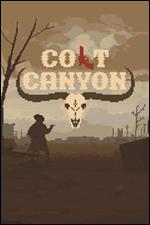 Xbox one no signal
Post by debrartin
0 Replies, 43933 Views