Deponia Doomsday Hits the Xbox One

If you are a point-and-click genre gamers, then we just happen to have a bit of news for you here. Daedalic Entertainment has announced that Deponia Doomsday, the fourth and final installment in the  point-and-click series, has been released to the masses, including gamers on the Xbox One.

In Deponia Doomsday, the flying city of Elysium has fallen, hideous Fewlocks inhabit the junk planet Deponia, and Rufus is apparently the sole (human) survivor. He sees only one way out: Deponia must be blown up. Terrified, Rufus awakes in his bed. Was it a dream or a vision? As the oddball Professor McChronicle detects several time anomalies, Rufus finds a time machine and immediately sets out to duly muddle up the past, present and future.

We thought you might want to know about a few features of the game, so here you go:

You can check out the trailer below to see if this game might just interest you: 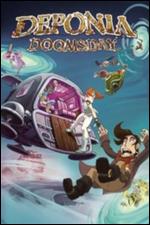