Blast Zone! Tournament Hitting the Xbox One in April

Looking for a new party-like game. Well,  Blast Zone! Tournament, a modern take on competitive bomb-throwing arena games, is bringsing frantic fun to the Xbox One in April. The game is now on Steam and the PS4, and why the delay on the Xbox One, we have no idea.

Blast Zone! Tournament kicks things up a notch from the franchise’s first and second iterations which were enjoyed by more than 1,000,000 players. Thirty-two player battles await across 283 multiplayer maps, with PlayStation 4 to PC cross-play enabled. Online matchmaking unites combatants across 10 competitive modes, including Free-For-All, Team Deathmatch, Bomb Blast and more.

You will triumph over the story-driven single-player campaign, which boasts 240 distinct challenges. Outfit bombers with more than 10 billion cosmetic combinations and challenge the very best to claim glory on the leaderboards.

Matches are brought to life via a vibrant cartoon style courtesy of John Wu, a former concept artist at Sony Computer Entertainment of America who worked on Ratchet & Clank, God of War III, PlayStation All-Stars Battle Royale and Twisted Metal.

Oh, and one more note, the Xbox One X version of Blast Zone! Tournament boast 4K HD and 60 FPS for an even sweeter visual treat. 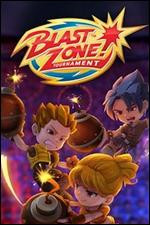