$1 Million on the Line in WWE 2K19 Million Dollar Challenge

2K recently announced details surrounding activity for the WWE 2K19 Million Dollar Challenge – the capstone event for WWE® 2K19, taking place during WrestleMania Week. Four finalists from around the world will compete – with support from WWE Superstar coaches Kofi Kingston and Big E of The New Day; Paige; Ember Moon and The Miz – for the opportunity to challenge WWE 2K19 cover Superstar AJ Styles to a one-on-one match in the video game with $1 million on the line. 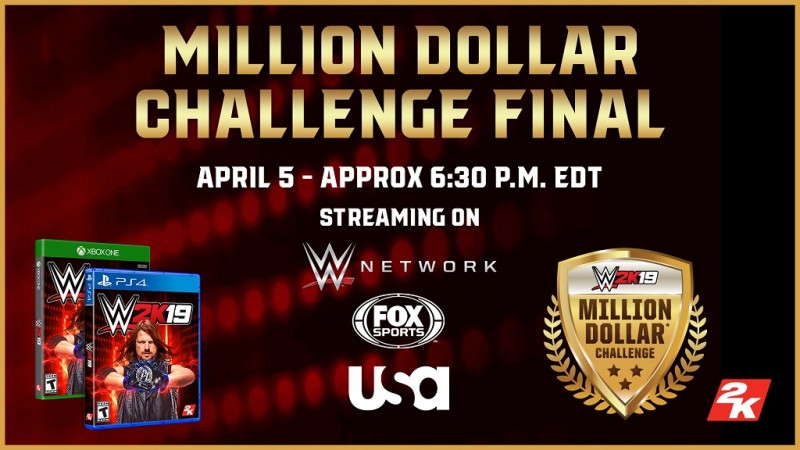 So, what did it take to get to this point. Well, we are glad you asked.

Following the launch of WWE 2K19 in October 2018, the WWE 2K19 Million Dollar Challenge saw fans from around the world – including the Americas, Europe and Asia Pacific – enter the competition. After completing the in-game WWE 2K19 Million Dollar Tower and submitting promotional videos highlighting how they could potentially defeat AJ Styles in a one-on-one matchup, Gregory Davis from Jacksonville, Fla.; Stephan T. Benson from Philadelphia, Pa.; David Hoey from Sydney, Australia and Roman Droßard from Pfalzfeld, Germany were selected from all global entries as the competition’s four finalists heading to WrestleMania.

All WWE 2K19 Million Dollar Challenge activities will be hosted throughout the day on Friday, April 5, including:

Finale: Taking place during the NXT TakeOver Pre-Show at Barclays Center in Brooklyn, NY and streamed at approximately 6:30 p.m. EDT on the following digital platforms:

So, there you have it, four people are going to go head to head to see who gets the chance at one million dollars.