So, ummmmm, a new game or two was released on the Xbox One today....well, they are older titles from Square Enix, but they have been given the Xbox One treatment.

The Two classic RPGs that have arriveed on the Xbox One for the first time are Final Fantasy X/X-2 HD Remaster. They are both now available on the Xbox One.

These new remastered games bring both beloved titles to long-time fans of the series and a new generation of players in stunning high definition, complete with new features including new challenges, gameplay modes and more. 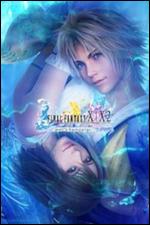