God's Trigger, a Game for Those Looking for Carnage - Out April 18th

Techland Publishing claims that it will rain down fire and blood onto the masses this week as the visceral carnage of God’s Trigger, from developer One More Level, will hit various platforms, including the Xbox One, April 18th.

In the eight-hour campaign of carnage, playable solo and in co-op, players will need to skillfully slay possessed humans, doomsday cultists and supernatural creatures from the skies above and the depths below. Five epic bosses, for which extra levels of murderous talent will be needed, will also do their best to stop protagonists Harry and Judy from saving creation.

Techland Publishing was to celebrate the launch of God’s Trigger, so much so that they ave some amazing prizes to give away to one solo winner and two co-op winners that can prove their murderous skill in battle. Players that dish out death in the most spectacular ways can upload their combat footage to YouTube with the tag #GodsTrigger and "God’s Trigger" in the title for the chance to win powerful Alienware gaming laptops.

With all that being said, check out the launch trailer below for a visual look at what to expect: 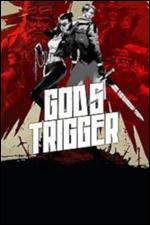