Double Kick Heroes Rocks Onto the Xbox One

Ok folks, here is an original rhythm game that is coming onto the Xbox One. Headbang Club , Plug in Digital and Hound Picked Games, are pleased to reveal that Double Kick Heroes will release on the Xbox One later this year!

What is this game you ask. Well, we are glad you wanted to know.

In Double Kick Heroes players may select Arcade Mode or venture into the Story Mode, where they will come across some of their own Heavy Metal Heroes, whilst fending off hordes of monsters, the undead and sick boss encounters.

Not only is the game full of delicious licks, infectious riffs and the undead, but players will have no choice but to master the Double Kick (a drumming technique used to speed the tempo of music) if they want to survive, as they thrash to 30 unique metal tracks composed by the legendary Elmobo.

Here are a few of the key features that might just interest you:

So, does this seem interesting? Well, if it does, or even if it doesn’t, check out the video below to see the game in action (trailer was originally for Early Access introduction): 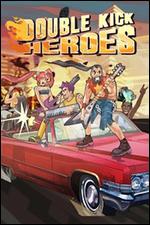