’Race With Ryan’™ the first-ever console game based on the massively popular global kids’ brand ’Ryan’s World’™. Kids and families can race to victory across multiple, magical worlds as Ryan and his friends including Moe, Gus, Alpha Lexa and more. The game also features a four-player-split-screen to race with friends in multiplayer mode. ’Race With Ryan’ is available today on consoles and PC.

Exclusively at Smyth’s Toy Store in the UK for £29.99 and many retailers in the U.S. including Target, Amazon and Gamestop for $39.99 with a version of the game which includes a limited edition Race with Ryan collectible die cast vehicle exclusively available at Walmart in the USA and Big W in Australia. ’Race With Ryan’ can also be downloaded digitally from each console’s stores.

"We are delighted to be a part of today’s launch of the first ever ’Ryan’s World’ console video game, working with one of the biggest YouTube creators in the world, to create something that has never been seen before," said Terry Malham, CEO of Outright Games. "Race With Ryan is the embodiment of family friendly gaming that we here at Outright Games are proud to create every day. It’s colourful, hilarious fun with friends and family and brings one of the world’s biggest kids’ entertainment franchises to a must-play interactive experience for a brand-new audience."

"We had so much fun as a family when helping to create this game," said Ryan’s father, Shion Kaji. "Players will see and hear Ryan and the beloved characters from Ryan’s World as they experience the exciting race gameplay in different magical lands."

As one of the top kid content creators on YouTube, Ryan’s channels received over 41 billion views to date, and amassed over 31 million subscribers (and growing).

We’re hoping to check this out and have a full review in the future! 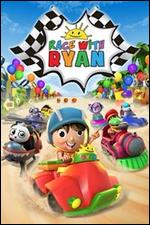