Publisher Headup and developer Elder Games released a new trailer for their sci-fi action RPG Everreach: Project Eden. In this trailer, you’ll be introduced to protagonist Nora’s weaponry and the Everreach Security Unit.|

Like every modern mega-corp, Everreach employs its own personal security task force to handle company-related emergencies; here it has you exploring the newly discovered planet Eden, in preparation for humanity’s arrival.


Everreach: Project Eden is a fast-paced, story-driven action-RPG set on the visually stunning planet Eden. In Everreach, you play as Nora Harwood, a member of the Everreach Corporation’s Security Division who is on a mission to clear the planet for colonization and investigate recent unusual happenings on the planet’s surface.

Explore a vast alien world and descend into its depths to discover the ancient secrets of a long-forgotten civilization. Packed with engaging ground combat, high-speed vehicular warfare, and a compelling level and skill system, Everreach immerses you in its intriguing story and diversified gameplay. 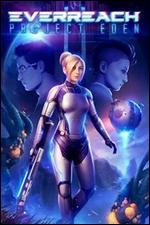