RPG Platformer Underhero is Coming to the Xbox One Soon

Seems that there is a new platform game coming to all consoles, including the Xbox One; however, if you play on Microsoft’s console, you’ll have to wait a little longer than the other consoles.

What is this platformer y ou ask? Well, Indie publisher Digerati has announced that it’s bringing the colorful 2D RPG-platformer Underhero for fans to play.

The debut game from Venezuelan studio Paper Castle is inspired by Paper Mario (among many other RPGs) and offers its own oddball spin on RPG adventures with a special timing-based combat system, old-school platforming fun, a quirky cast of characters, and a lighthearted story about an unlikely hero on an unforgettable journey to save a kingdom.

So, as you noted I metnioned Xbox One owners getting this game later then the other consoles. Well, it will be available to download on February 14 on Microsoft’s console. There will a 20% discount for anyone who pre-orders Underhero from the Microsoft Store. As for the reason the Xbox One release is a few days later, we here at XBA have no clue as to why, but regardless, it is coming. 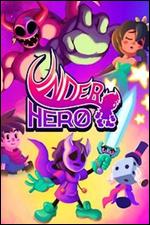