Assetto Corsa Competizione is an extraordinary racing simulation game allowing players to experience the real atmosphere of the GT3 championship, competing against official drivers, teams, cars and circuits reproduced in-game with the highest level of accuracy ever achieved. Sprint, Endurance and Spa 24 Hours races come to life with an incredible level of realism, in both single and multiplayer modes. Born from KUNOS Simulazioni’s long-term experience, this racing simulator takes full advantage of Unreal Engine 4 to ensure photorealistic weather conditions and graphics, night races, motion capture animations, reaching a new standard in terms of driving realism and immersion, thanks to its further improved tyre and aerodynamic models.

The launch of Assetto Corsa Competizione is part of a full plan that will cover both PC and console instalments of the game:

·        This April, the free Assetto Corsa Competizione v1.4 update for PC Steam will introduce new features – including the car showroom, new driver/car personalization choices and additional options for multiplayer servers – and lots of improvements of the game features, UI and algorithms.

·        The British Pack paid DLC, offering 3 new iconic circuits that complete the 7-race calendar of the British GT Championship, will be available this winter for both PC Steam and consoles. 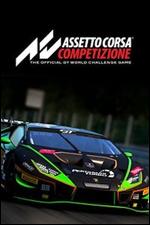