"THQ is proud to have Ricky Carmichael, the dominant figure in the sport of motocross, as our featured rider, "stated Germaine Gioia, vice president - licensing, THQ. "Ricky has had a phenomenal year winning the 250cc Supercross and Outdoor National Championships, in addition to his impressive win at this year's THQ US Open in Las Vegas."

"We are very excited to be bringing the No. 1 motocross franchise to Xbox," stated Michael Rubinelli, vice president - product development, THQ. "MX 2002 featuring Ricky Carmichael' features a blown-out freestyle mode with two new bonus worlds and a system that gives players the ability to tune their bikes with upgradeable parts."

NOTE FROM EDITOR: This is the first Motocross game for the Xbox, I really wish Microsoft would release Motocross Madness for the Xbox, but I imagine this will be just as good!
Source: http://www.thq.com/ 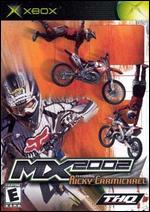