Bartlow's Dread Machine, an arcade shooter coming to Xbox One

President Teddy Roosevelt has been kidnapped! Only you -- a Secret Service agent made of tin -- can save him from the Anarcho-Satanists intent on ruining the American way of life.

This is the premise of Bartlow’s Dread Machine, an arcade shooter coming to Xbox One and PC this fall. Set inside a mechanical arcade cabinet circa 1907, Bartlow’s Dread Machine is a fast-paced arcade shooter that gives new meaning to the phrase "old school." Shoot down tin zombies, mechanical bad guys, and clockwork bosses in a rapid-fire chase across the United States to rescue the President and preserve the American Dream. Future generations are counting on you! 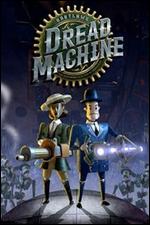