More details have been given for Hunting Simulator 2, the new hunting simulation developed by Neopica, releasing in North America on June 30th. In this new Hunting Simulator 2 video, you can explore the wide range of animals  found in the game.


The Hunting Simulator 2 development team heavily focused on the game’s environments to allow players to be fully immersed in nature. While exploring the 6 different hunting reserves recreated in Hunting simulator 2, players can find 33 animal species living in their natural habitats.

Among the small and big game, waterfowl and predators, each animal behaves realistically thanks to the specially designed artificial intelligence, which provides the most complete game experience possible. During your virtual hunt, you will need to pay attention to the different clues left by the animals and learn to approach them as discreetly as possible, whether they are alone, in a group or stalking their own prey!

Via an all-new interface, hunters can also choose every piece of their gear from over 75 weapons and accessories, as well as 90 official clothing items faithfully recreated from the sport’s top specialist brands: Browning, Winchester, Verney Carron, Bushnell, Kryptek and many more. 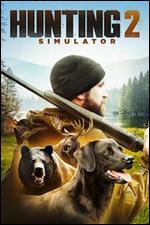