Agent 007 To Infiltrate The Xbox

REDWOOD CITY, Calif.--Dec. 13, 2001--The world of James Bond will soon flourish on the next generation console systems. Following the highly anticipated PlayStation® 2 release this fall, Electronic Arts and MGM Interactive will bring James Bond 007 in...Agent Under Fire(TM) to the Nintendo GameCube(TM) and the Microsoft® Xbox(TM) video game systems in North America in spring 2002.

"We are very excited to follow up the highly successful PlayStation 2 version of Agent Under Fire with games for the new consoles,'' said Jon Horsley, Executive Producer. ``With its high powered blend of first-person action and fast-paced driving, we feel the game is perfectly suited for Bond fans who own the GameCube and Xbox."

As with the PlayStation 2 version, players of the two new game systems will experience a unique and complete Bond adventure that immerses the player in the exciting world of secret agent 007. The game will feature 12 mission-based levels -- comprised of first-person action, covert stealth and fast driving -- spread out over 10 exotic locations around the globe. The action levels will give players the option of blasting their way through each level using high tech weaponry, quietly relying on spy-craft tricks and state-of-the-art gadgets as well as nerve tingling stealth to accomplish mission objectives or a combination of all three.

The driving levels, developed by the team behind EA's award-winning Need For Speed series, will feature an array of 007 exotic cars and other vehicles inspired by the Bond movies, including the BMW Z8(TM), Aston Martin DB5(TM), as well as a MGF-34 combat tank. True to the Bond universe, the vehicles are filled with Q-lab weapons and gadgets including rockets, guided missiles, machine guns, oil slicks, smoke screens and more.

"Beginning with the PlayStation 2 and now the GameCube and Xbox, the EA and MGM partnership is committed to bringing Agent Under Fire to the latest console technology," said Neil Haldar, Executive Producer at MGM Interactive. "We look forward to sharing the James Bond experience with owners of the new Nintendo and Microsoft systems."

The games will offer a robust multiplayer feature set in 12 exclusive arenas and five unique gameplay modes, including artificial intelligence bots, that will support up to four players.

Agent Under Fire for the Nintendo GameCube and Xbox consoles is being produced by Electronic Arts in Redwood City, CA and Electronic Arts Canada in Vancouver, British Columbia. More information can be found on the official EA product web site www.007.ea.com.

James Bond was first introduced to movie audiences in 1962 when Danjaq, LLC and United Artists, released Dr. No. The Bond films are one of the most valuable franchises in film history. More information about the films can be found on the official James Bond web site from MGM at: www.jamesbond.com, or at the Danjaq site at: www.007.com. 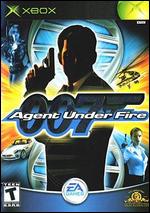