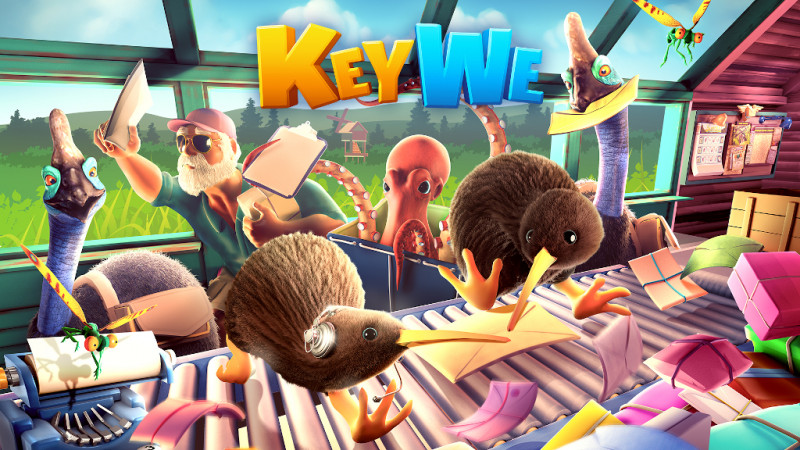 The mail must flow! Sold Out and Stonewheat & Sons are flapping with excitement to announce that adorable postal puzzler KeyWe will release August 31 on the PS5 system, the PS4 system, Xbox Series X|S, Xbox One consoles, the Nintendo Switch system and PC.

Plus, players who pre-order will receive access to the ‘Early Bird Pack’ at no additional cost  — featuring a range of bonus in-game content, including:

In addition, the Nintendo Switch version of KeyWe will include exclusive ‘Lavender Knight’ and ‘Amber Knight’ wardrobe accessories to let players go medieval on the mailroom. Equip Jeff and Debra with dazzling helmets and majestic shields, and tackle the Telepost for the honour of Bungalow Basin!

The PS5 version will also take advantage of the DualSense wireless controller’s haptic feedback and adaptive triggers to immerse players further into the world of Bungalow Basin, letting them feel the tightening tension of slingshots, the satisfying ‘pop’ of popping bubble wrap and the pitter-patter of Jeff and Debra’s tiny feet as they scurry around the mailroom.

“We’ve set our heart on making a warm, lighthearted game that friends and families can laugh at and enjoy together,” said Joel Davis, Animator at Stonewheat & Sons. “It’s been a blast creating the colorful Telepost and its unusual staff, and we can’t wait to welcome players to the world of Bungalow Basin on August 31.”

“KeyWe is an outrageously adorable game to play with a friend,” added Katie Clark, Senior Product Manager at Sold Out. “We’re incredibly proud of the whole team at Stonewheat & Sons and hope players will see something special in this game, the same way we do at Sold Out.”

KeyWe is a cute and chaotic co-op game starring Jeff and Debra, two small kiwi birds working in a fun and frantic mailroom. With no hands to help them, they must jump, flap, peck and butt-slam their way across an interactive landscape of levers, bells and buttons to type telegrams, ship packages and send urgent messages to keep the mail flowing.

KeyWe will be available physically and digitally on all console platforms.