The bot-bashing cult sensation comes to Switch, PS4, Xbox One and PC on 27th July

Developer Doborog announced today that the PC cult hit Clone Drone in the Danger Zone will be coming to Xbox One, PS4 and Nintendo Switch on 27th July, and will be leaving Steam Early Access on the same day with a massive launch update.

Clone Drone in the Danger Zone is a third-person robot sword fighter where any part of any body can be sliced off, playable across a variety of singleplayer, online multiplayer and online co-op modes. With your human mind downloaded into a robot gladiator, you must survive the sinister trials of the arena and join the human resistance against the evil robot empire!

Since the Steam Early Access launch in 2017 the game has been a regular feature on the bestseller charts and has gathered over 10,000 user reviews, an ‘Overwhelmingly Positive’ (97% positive) rating on Steam, and almost 30,000 Steam workshop submissions from the community. Over time, the game has become a virtual playground for a large and passionate community that competes daily in the robot arena of Clone Drone in the Danger Zone.

Doborog Games was founded by solo indie developer Erik Rydeman (Playfish, Popcap and EA Mobile) and has since grown into a small core team of 5. Their first full game, Clone Drone in the Danger Zone, started as a small prototype that quickly gathered traction on YouTube and launched into Steam Early Access in 2017. The game has since sold hundreds of thousands of copies, is regularly listed in the Early Access top sellers lists, and has built a loyal fanbase with a regular flow of updates. In 2021 Clone Drone in the Danger Zone will see its full release as well as a launch on Nintendo Switch, PS4 and Xbox One. 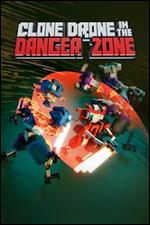