Insane stunts in a crazy open world - play solo or with friends on any combo of devices!

Crash Drive is back! Explore a colorful open world, perform incredible stunts, customize your race car, compete in a variety of fun games, or just goof off and hunt for secrets. Crash Drive 3 is multiplayer and multi-platform – play alone or with your friends on any combination of devices! Gamers on PC, consoles and mobile devices can all drive together in Crash Drive 3!

Crash Drive 3 will release on July 8 simultaneously on PC via Steam and Epic Game Store, PS4 & 5, Xbox One, Xbox series X/S, Nintendo Switch, Android and iOS, and cross-play will be possible via all devices!

As players explore the five different areas of the huge open world, they can take part in competitive events that everyone in-game can join. Whether it’s a game of cops and robbers, attempting to tag the most scenery with stunts, or destroying a giant beach ball, it’s sure to be a wild time! There are even airborne tank battles to discover… and if you just want to ignore all that and goof around, that’s fine too!

Even better, you can do it all with friends! Crash Drive 3 supports full cross-play across every platform, from PC and consoles to mobile and Nintendo Switch! No matter what device they’re using, you can jump online and race your friends! The varied world of Crash Drive 3 is open for you to drive where you want and make your own road!

From searing deserts to the frozen arctic and even the moon, everywhere is packed with stunt opportunities, decorative details, and secrets to discover. However you like to play, whether it’s joining events or just exploring and pulling the craziest stunts you can, you’ll be earning cash to upgrade and unlock new rides! Use your winnings to buy funky antennas, license plates, and more. If you reach the max level, you can even show off with a solid gold car!

So what are you waiting for? Take the wheel and have a blast in Crash Drive 3! 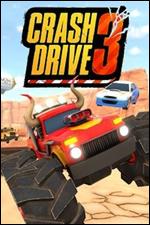