Rogue Lords is Now Available on Xbox One

THE FORCES OF EVIL ARE COMING TO CONSOLES

Rogue Lords is now available on Xbox One, PS4 and Nintendo Switch

The Devil is back! Rogue Lords, the turn-based roguelike game developed by Cyanide and Leikir Studio and published by NACON, is now available on Xbox One, PS4 and Nintendo Switch.

Available on PC since September 30th 2021, Rogue Lords, which has already successfully gained a wide audience, has also won over the jury at the NYX Game Awards.The American event which recognizes creativity in video games awarded two prizes to Rogue Lords. It won first place in two categories from amongst more than 500 nominees: "PC Game - Best Art direction" and "Best Character Design".

Now you can explore 18th Century New England and the Salem Witch Trials on consoles, playing as the Devil. Once again in the world of humans, you are seeking revenge against the Demon Hunters after having suffered a stinging defeat ten years ago.

With a team comprised of 3 Disciples, selected from amongst 9 famous evil geniuses, you have to make cunning use of each of their specific abilities and combine their powers to create devastating attacks to overcome the members of the Sanctua Lumen, a new sect devoted to hunting down your followers.

Rogue Lords mechanics include a unique blend of turn-based combat, interactive events and the Devil’s power to play by your own rules: modify your Disciples’ and opponents’ health gauges, swap bonuses and penalties to gain a tactical advantage in combat, open portals on the map to reach inaccessible places and force the scales to tip in your favour during interactive events. To defeat the forces of Good you will have to master the technique. 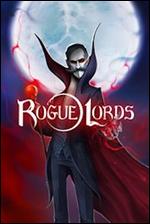 A first-look tour of the greatest show in London, where you’ll have to defend the city from maddened citizens by using unique carnival talents, recruiting new entertainers, correctly utilizing the right abilities, tactics, positioning and much more!

In Age of Sorcery, players will choose whether to grasp the virulent powers of sorcery, sacrificing a portion of their life force to cast deadly spells and summon unholy creatures.

Xbox one no signal
Post by debrartin
0 Replies, 91099 Views