PROVIDENCE, R.I. (Reuters) - There are two kinds of physics: Real-world physics that explains why black holes can suck up everything like a super-charged Hoover vacuum, and why people who think it's OK to bite the insulation off live wires don't live to share the experience.

And then there are cartoon physics. They don't explain much of anything, but they let you pull a 300-pound hammer out of your back pocket, and will delay you from plunging into a canyon even after you have run full-steam off the cliff.

A lot of PC and console racing games brag about using real-world physics to control the car's movements, even though your vehicle never gets so much as a dent after crashing into every trestle, barrel and hot-dog vendor on the street.

"Cel Damage", the $50 XboX racing game from Electronic Arts just released for GameCube, is a refreshing change. Real-world physics don't apply here. In fact, it revels in being pure cartoon.

Giant hammers smash other cars and their drivers. Oversized chain saws slice through opponents like a knife through moldy brie. Cars twist and turn as they take the corners. And if you make the mistake of driving off the edge of a cliff, the game seems ready to give you a moment to back up onto solid ground instead of falling. 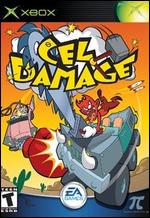 Xbox one no signal
Post by debrartin
0 Replies, 97766 Views