12:29 Acclaim's cash is on the up, and Criterion's Burnout is at the core of its future plans, along with internally developed spandex feast, Legends of Wrestling. Both appeared on PlayStation 2 last Christmas. Both were confirmed for Gamecube and Xbox launch today for the third quarter of this year. "Domestically, we were excited by the success of two new brands that we launched, Burnout and Legends of Wrestling, which we feel have the potential to become long-term franchises," said company boss Greg Fischbach.

Criterion refused to comment on the two projects today, saying only that it was too early to reveal any of the four in-house games currently under construction. The company has already pointed to E3 as being the first showing of its current in-house titles. Car smasher Burnout attracted attention in the run-up to Christmas for its ease of use, punchy visuals and thrilling gameplay. Watch for first details and images right here.

Acclaim reported more than $17 million profit for the quarter ending December 2, 2001, on the back of revenues of $81 million. The company is now predicting a 52 percent revenue increase for 2002 over the previous year.
Source: http://www.acclaim.com/ 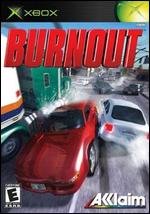