CHICAGO-Jan. 16, 2002-- Midway Games Inc., a leading software industry publisher and developer, announced today that SpyHunter®, the all-new update of Midway’s popular 1980s action-racing game, is in development and scheduled to ship this spring for the Xbox(TM) video game system from Microsoft and Nintendo GameCube(TM). SpyHunter shipped for the PlayStation®2 computer entertainment system on Sept. 24, 2001.

"SpyHunter was hugely popular on the PlayStation 2 and we expect it will be just as big of a hit on the Xbox and Nintendo GameCube," said Helene Sheeler, vice president of marketing, Midway. "Using all of the original game elements, including villains, weapons vans and theme music -- combined with the power of these great new consoles -- SpyHunter creates an electrifying gaming experience."

With a next-generation 3D design, incredible high-tech weaponry and a sleek new vehicle (the G-6155 Interceptor) the SpyHunter player is on a mission to save the world and must make split-second decisions while engaging in offensive attacks and defensive counterattacks. The SpyHunter player can never relax while maneuvering through 14 high-adrenaline missions, which play out in a variety of exotic worldwide locations.

To add even more intensity to the relentless action, Island Gold Recording act Saliva has recorded two versions of "The SpyHunter Theme." Based on the Peter Gunn theme song, a new lyrical version as well as an instrumental format are included in the game.

The daring reconnaissance missions lead the SpyHunter player around the globe to exotic locations (Panama, Key West, England, Germany, France, the Middle East and Venice). Each location is modeled to a high degree of photo-realism and provides recognizable landmarks and scenery to offer compelling visual themes.

The ultimate counterintelligence prototype vehicle with morphing abilities, the G-6155 Interceptor, has offensive and defensive weapons including 25mm cannon machine guns and heat-seeking missiles. The G-6155 Interceptor morphs on-the-fly into a deadly high-velocity speedboat, a turbo jet watercraft or a super-charged motorcycle with a turbine engine (horsepower classified), which helps players escape and evade the relentless onslaught of enemy fire.

In SpyHunter, the player must always be ready for action as heavily-armed enemy vehicles lurk around every corner ready to strike at the first sight of the Interceptor. Weapons vans appear throughout the game to equip the Interceptor with offensive weapons including machine guns, missiles, EMP weapons and counterattack weapons such as oil slicks, smoke screens and flame throwers. Players have no choice than to be totally immersed in the action with the clandestine plot that unfolds throughout the game, revealing the ultimate secret of SpyHunter. 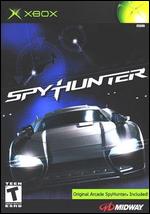 Xbox one no signal
Post by debrartin
0 Replies, 97949 Views