Mesquite, Texas - January 18, 2002 - Axis forces are primed for a Blitzkrieg into the console arena with the development of Return to Castle Wolfenstein(tm) for the PlayStation®2 computer entertainment system and the Xbox(tm) video game system from Microsoft. Expanding on the same wickedly addictive gameplay that has driven the PC version to ship more than one million units and top sales charts worldwide, Return to Castle Wolfenstein for the next generation game consoles will feature unique design and technical modifications that take full advantage of each platform's advanced technology. Return to Castle Wolfenstein is being developed by Raster Productions and executive produced by id Software, and is currently rated "RP" Rating Pending by the ESRB.

"Return to Castle Wolfenstein has quickly become the most critically acclaimed and widely played action shooter of 2001, and we're thrilled to bring the Wolfenstein experience to a new generation of gamers." Todd Hollenshead, CEO, id Software said. "We're working with Raster on a number of technical and design modifications that will provide Xbox and PlayStation 2 owners a definitive gaming experience that is designed and built for their systems."

"The QUAKE III Arena engine coupled with the power of these next generation gaming systems creates a remarkable synergy that will serve as the benchmark for future action-shooter games," states Larry Goldberg, executive vice president of Activision Worldwide Studios.

Set against the backdrop of WWII, Return to Castle Wolfenstein plunges players into a maelstrom of action, espionage and covert operations, as an American soldier tasked with infiltrating the heart of Nazi Germany and stopping the darkest plans of the Third Reich. Throughout the game, players are locked in combat with waves of Nazi storm-troopers, undead Teutonic knights and the twisted products of genetic experimentation. Return to Castle Wolfenstein further draws the player into the nightmare with advanced artificial intelligence (AI), photo-realistic character and environment textures, revolutionary effects, and an immersive story that unfolds before the player like a movie. 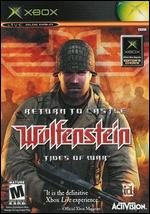 Xbox one no signal
Post by debrartin
0 Replies, 38494 Views