Acclaim Entertainment has announced plans for a new platformer on the GameCube, PlayStation 2 and Xbox dubbed ’Vexx.’ Scheduled for release in October 2002, the game takes place on the forsaken planet Astara. Infiltrated by an alien leader Dark Yabu and his minions, the inhabitants of Astara were enslaved and forced to work in caves around their villages. The game’s hero, Vexx, is on a mission to avenge the slaying of his grandfather by Dark Yabu. Escaping the Astara camps, he manages to sneak aboard an alien ship and fight for the freedom of his people. The game will feature 18 levels spanning underwater cities, caves, and volcanoes. Gameplay will progress in real-time with day and night cycles and associated lighting. Aside from the main adventure, the game will also feature hidden multiplayer party games. Graphically Vexx looks impressive this far, check out some early screens from the Xbox version below. The videogame developer "Acclaim" has announced the videogame title "Vexx" which is currently scheduled to release on the Xbox, Gamecube, and Xbox in October 2002.

Vexx is range from 18 different levels going through underwater cities, volcanoes, and caves. This game will support "Shenmue" like feature of having day and night changes. Vexx will also feature hidden multiplayer party games that should add for some great replay-value and teriffic fun if you have a friend over.

Go here to see screenshots of this game.
Source: http://www.coremagazine.com/ 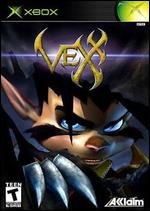