Indiana Jones May Come To Xbox

SAN RAFAEL, Calif. -- January 22, 2002 -- LucasArts Entertainment Company LLC today announced a development relationship with The Collective, Inc. to create the next Indiana Jones game, marking the return of film's most compelling and celebrated action hero to interactive entertainment. The game, expected to release fall 2002, will be available on a variety of next generation console platforms and PC.

The upcoming title follows in the epic tradition of LucasArts' rich Indiana Jones action-adventure legacy. It will feature an all-new intriguing and historically relevant story set amidst the world's most exotic locales. The game will utilize The Collective's proprietary engine technology, bringing to the series a dynamic new level of fighting action and challenging puzzle elements. "Similar to LucasArts' collaborations with other premier game studios, The Collective bring considerable technological and development expertise that, in this case, will greatly benefit one of our most important brands, Indiana Jones," says LucasArts' President, Simon Jeffery. "The Collective's efforts on the highly anticipated game Buffy The Vampire Slayer( were a key component in determining this relationship. The two companies together will bring new and compelling elements to Indiana Jones that will ensure a deeply engaging and fun game play experience.

"My partners and I have admired LucasArts and their commitment to quality and innovation since the early 8-bit days and we are thrilled at this opportunity to bring Indiana Jones to life on next generation consoles and PC," says Doug Hare, vice president of production for The Collective. 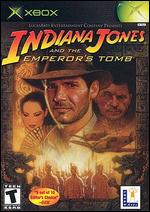